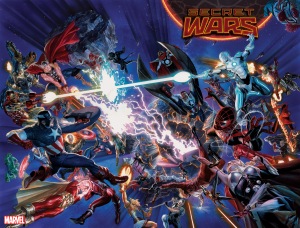 I decided to really jump right into the deep end with this summer’s Secret Wars event so it’ll mean buying a lot of comics and spending a lot of money.  I’m not planning on going overboard and buying all the tie-in issues, so far I’m looking to spend between 60 to 100 dollars total for the whole event out of pocket.  This means if the rest of the main series Secret Wars issues cost 3.99 just the main series will cost 34 dollars which leaves 26 to 66 dollars for tie-in issues which is approximately 9 to 22 issues.

Here is my plan of attack.  I’m going to start by picking up the new Secret Wars main series and read them as they come out.  That will give me the primary (convoluted as it is) story along with little glimpses of what is going on in the different Battle Worlds. So if they mention a Battle World that seems interesting I’ll pick up its tie-in issue.  But if a particular Battle Work seems lame or covers something I don’t care about, I won’t pick up their tie-in issues.

There are some tie-in issues I’ve pre-ordered because I liked their original story (House of M, Civil War, Old Man Logan, etc.) and are already on my pull list. 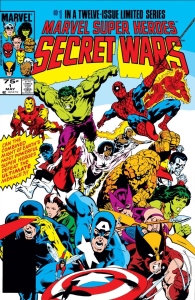 I’m going to also read the original 1985 Secret Wars as homework along with Marvel’s “True Believers” first issues of tie-in books (some I have already read but it would be a good refresher) which include (which you can get on Comixology for 99 cents here):

I’m also going to attempt to read some of the recent Robert Hickman issues of Avengers that he’s been doing for the last 3 years that lead up to Secret Wars.  All of these Avengers issues I’ll be reading on Marvel Digital Unlimited and so there will be a 6 month gap which I’ll just read them as they come out on MDU (Marvel Digital Unlimited).

We’ll see how this goes.  I’ll post again at the release of issue 4 of Secret Wars which will be the halfway point and see if my plan worked and how I feel about the event in general.

Born out of the depths of Hell Jason is considered to be the song bird of his generation. END_OF_DOCUMENT_TOKEN_TO_BE_REPLACED
This entry was posted on Monday, June 8th, 2015 at 11:34 am and tagged with Comic Books, comic events, Comics, dr. doom, Marvel, Marvel Comics, marvel true believers, multiverse, secret wars, secret wars 1985, summer comics, summer event and posted in Comic Books. You can follow any responses to this entry through the RSS 2.0 feed.
« Comic Block May 2015 Unboxing
Comicpalooza 2015 »