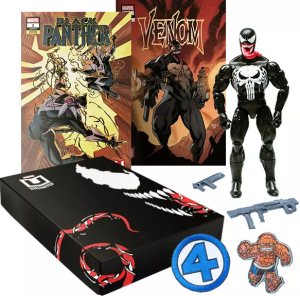 Does it make a lot of sense to do an unboxing for something that came out a year and a half ago?  Not really.  But here we are.

This is my fifth year being a Marvel Unlimited Plus member and the theme for 2018 was Venom, based on the fact that the movie was coming out a few months after the release of the new Unlimited Plus kit.  I’ll be honest I’m not a huge Vemon fan.  When a villian becomes popular enough to become the “star” or the “anti-hero” it has rarely worked out.  They wind up just being the hero “but edgy” while not actually being edgy at all.  But that isn’t why we are here.

First off here is a run down of everything included in the kit:

The box was venom themed and looked pretty good.  It had a cool venom logo in the inside and on the flap.  I added a bonus picture of Celine helping me take pictures.

First up is the yearly letter.  It’s very much the least important item in the box but I actually do appreciate it.  Its on nice paper stock and has a vemon theme.  I hope they continue to include this in the future boxes. 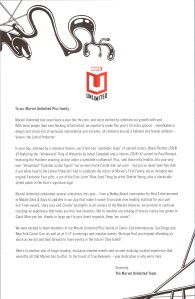 The comics are look great, the art is fantastic and event though its two different artists they have a similar theme.  I like that the art also takes up the whole front cover and has the Marvel Unlimited logo at the bottom as well.  In my case I enjoy the comics and have kept all of the ones I’ve received in these Unlimited Plus packages.  However if you are looking at upgrading to the Plus subscription to make money off the comics sadly they don’t go for much at all.  It’s been a year and a half since this box was released at the resell price for these comics is still at $5 which is the cover price for the comics.  10 dollars for the two is still something but for a variant that I’d imagine is actually kind of rare i’d have thought it would go for more

Next is the Venomized Punisher Marvel Legends figure.  Overall it’s a nice looking figure.  It doesn’t look like they just put spare parts together like they did last year for the Tony Stark figure and used a new mold.  Like I said before, I’m not a huge Venom fan so I actually winded up selling mine on ebay.  Unlike the variant comics the Marvel Legends figures still catch a decent price and this figure is still going for 60 to 100 dollars on ebay.

Next is The Thing Enamel Pin and Fantastic Four Patch.  There isn’t a whole lot to say about these.  The quality of the patch is fairly good but the quality of the pin is only ok.  I do like that they have been including the patches in with the kits but wish the pins were better quality.  It is a little odd that they went with Fantastic Four for these since the box, Marvel Legends figure, and comics were all venom themed. 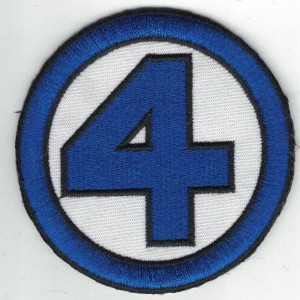 What else do you get in a Marvel Unlimited Plus subscription?  There are invites to members only events at SDCC, NYCC, and C2E2.  They actually seem like cool events that if you go to them you get additional free variant covers of comics and some insider information at the panel.  However, I don’t live anywhere near these events and will likely never go to them so it’s not much a benefit.  You also get 15% off digital comics from comixology / Marvel Comics Digital store.  This isn’t a terrible benefit but I generally forget about it and don’t use it.  In order to get it you have to buy your comics through Marvels separate digital store so it’s unlikely you’ll get to stack your 15% off with other comixology deals.  If you are buying full price comics from marvel digitally this could be a good deal though.  Lastly you can get 10% off all things from marvelshop.com.  I’ve never used this benefit before and forget that it is a benefit entirely, but hey, 10% isn’t much but it’s something.

Overall I’m pretty pleased with the package.  Basically it’s a 30 dollar premium to get Marvel Unlimited Plus over a yearly Marvel Unlimited subscription and I’ve still found it worth it to pay for it.  Selling the Marvel Legends figure actually brought the price of the entire subscription down quite a bit but it’s not something I factored in to my decision to continue to get a plus subscription