This month’s Comic Block had a Judge Dredd Theme.  I AM THE LAW!

Here is what was inside:

First off let me say that this month’s Comic Block took a ridiculous amount of time to get here.  I got the “Your Order has Shipped” E-Mail on December 14rd and didn’t receive the box until January 12th.  My Comic Block was being processed by UPS for an entire month!  It’s not that I’m mad that it arrived so late in January, it’s that it told me it was coming and then nothing happened for the better part of a month.  Apparently the people of Comic Block tweeted out that the boxes were going to be late due to Christmas but still, we all knew Christmas was coming and it feels like a lack of plan on their part.

These multi-publisher crossovers seem to be what IDW does the most these days.  We’ve already seen one of these in the July Comic Block with Green Lantern / Star Trek.

I actually thought the Green Lantern / Star Trek crossover was a pretty solid book… The Batman / Teenage Mutant Ninja Turtles, not so much.

I’ll be honest I thought this book was going to be garbage the second I saw it, but decided to give it the benefit of the doubt, after all it did have James Tynion IV as the author so it couldn’t be that bad?  Well it wasn’t god awfully bad but it wasn’t good either.  It was very meh, which might be worse than it just being a fun terrible book.  The story doesn’t matter because its so forgettable that I already don’t remember what happened and I literally just finished reading it.  The art is actually pretty terrible which was a huge disappointment.

It is a watercolor shaded style which just looks cheap.

The turtles look decent but all the Batman aspects look like they were drawn by someone who is drawing Batman for the first time.

If you love the Turtles and Batman maybe this is for you, but for everyone else I would just pass.

When I found out this book was going to be in this month’s Comic Block I was very excited.  Scarlet Witch is one of the characters I don’t know very well but would like to find some good stories to dive in to.  Unfortunately this isn’t the book for that.

The only Scarlet Witch arc I’ve read was House of M in which Scarlet witch depowered all but a couple hundred mutants simply by saying “no more mutants” and Avengers vs. X-Men when she fought Hope Summers.  I enjoyed both of those stories but neither really gave me a clear explanation of what Scarlet Witch’s powers are, other than she is extremely powerful.  So I was looking forward to this comic to hopefully bring some clarity.

Clarity I did not get.  So apparently Scarlet Witch is not a mutant but is actually a real witch and her powers are possibly spell based?  This comic centers around Scarlet Witch going to a crime scene to help the cops out with a murder that seemed to be magically motivated.  This is super weird.  It is basically like a episode of Law & Order but with a mutant, in costume, helping out.  Turns out that the murder was actually possessed by a demon and said demon had actually possessed the lead detective that was with Scarlet Witch at the crime scene.  Scarlet Witch was able to exorcise that demon and save the detective. 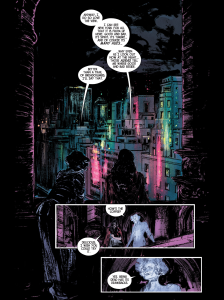 This comic is weird.  It’s a crime procedural, Scarlet Witch has a ghost friend that hands around her apartment, and she walks around New York in costume without anyone giving her a second look.

There was also a part where Scarlet Witch talks about the Cat Massacre of 1730 which is a part of history that I could have been perfectly fine not knowing about. 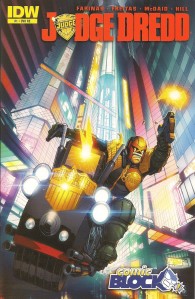 The shirt in this box had me pretty excited for some Judge Dredd, so much so I winded up watching the Dredd movie from 2012.  So I was very disappointed and confused when I actually did read the comic.  It wasn’t that it was particularly bad, its just that they are clearly going for a big arc here and this being the first issue we were left entirely in the dark of what was going on. 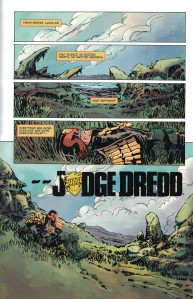 The comic begins with Dredd waking up in a field and clearly something happened and a large amount of time has passed.

Dredd picks up a couple of moppets.  They then go inside a weird building thing that looks like one of the mega cities and surprise it is a mega city!  And that’s it, we don’t get any more information or plot.

There is some weird stuff in this comic too.  There is this strange herd of animal people that spout off weird vaguely political things that get mowed down.  This might wind up being a great arc, its definitely got enough in this issue to have me intrigued.

Character Profile on The Maker

Today we are here to discuss the Maker, and no, I am not talking about Jesus. I’m talking about The Maker of Marvel Comics, the alter ego of Ultimate Reed Richards.  Let’s take a minute to appreciate that sentence. Reed Richards is Mr. Fantastic of the Fantastic Four. But this is not the normal canonical version of Reed Richards, this is the alternative Ultimate Universe version of Reed Richards.  But this is not quite that version either, we are going to discuss the second wave of the Ultimate Universe, the Ultimate Comics version. The Reed Ricards which has a big metal helmet on his head and is known as The Maker. 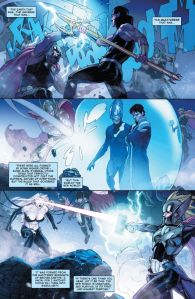 So this story starts with Secret Wars Issue 4.  This is the issue in which the Life Raft (the one with the good guys in it) and the Cabal (the one with the bad guys in it) confront Dr. Doom.  When this happened I saw the Maker (Ultimate Reed Richards) for this first time and was very confused.  Why does he have this thing on his head?  Why was he on the ship with the villains and not the heroes?  WHY DOES HE HAVE THE THING ON HIS HEAD?

My search started on where else but Wikipedia and Comic Vine which were surprisingly little help.  Both mention that at some point Reed Richards becomes the Maker but no explanation of why or how.  The Marvel Wikia had more information but again still didn’t explain why or how Reed became the Maker.

I’m stuck.  I don’t know where to look and there is no great source of information on Ultimate Reed Richards / The Maker.  Finally I have a breakthrough and realize the image that Marvel Wikia is using for the Maker is the cover of Issue 9 of Ultimate Comics Ultimates.  I open up the series on Marvel Unlimited and decide spot check some issues and see if I can find where this transition happens.  I open Issue 1, Page one and see the following image.

This is why we can’t have nice things.

It’s a little spread out but all together it makes one complete story. I would like to bitch about how it wasn’t worth it but the truth is that this whole arc is actually really great and something I would consider a must read. I’ve never been a huge fan of the Fantastic Four but this is hands down the best Fantastic Four story I’ve ever read. If you have access to Marvel Unlimited or find it on sale at Comixology you should definitely give it a read.

If you don’t want to read it and just want to know what happens here is a brief super spoilery summary.

Ultimate Doomsdsy starts with a mysterious alien worm thing that goes loose on New York City.  At first it’s thought to be a Roxxon Corp experiment gone wrong but is quickly realized to be much bigger than Roxxon as it attacks the whole city.  In the end the aliens behind the attack are caught and the worm thing is stopped.  The worm thing causes a lot of damage including the entire Baxter Building.  It also destroys the childhood home of Reed Richards (with Reed inside) and the home of Peter Parker.

Cut forward aliens are continuing to attack and various marvel heroes (Spider-man, Spider-woman, Captain Marvel, Nick Fury, the rest of the Fantastic Four) try to figure out who is behind it.  Susan Storm gets further than most and is brutually attacked by the person behind it all who is… Reed Richards!  It turns out Reed was behind it all and was using the attacks as distractions as he began to build a utopian society in the Negative Zone.  A whole mass of Ultimates go to the Negative Zone and attack him and are able to stop Reed while Reed himself is lost in the destruction.

Ultimate Comics: The Ultimates takes place immediately following the events of Ultimate Comics Doom.  We last saw Richard Reed floating in the abyss of the negative zone.  In the first shots of this series we see Reed with his maker helmet on in the middle of no where Germany with a huge group of followers.  He builds “the dome” which is a huge structure in which he is able to slow down the effects of time.  So while only days passed in our world centuries passed under the dome which lead to the evolution of the human species.  Just to keep up Richard Reeds had to expand his own brain capacity which is now in a freakishly large shape that fills his maker helmet.  By the time the Ultimates come to investigate the Dome society is huge and more advanced technically and biologically than anything on earth.  Reed continues to expand the size of the dome outside of just rural nowhere to destroying occupied cities nearby that were in the way.  The Ultimates are literally powerless to stop Reed as all methods and technology they have are woefully out of date.  Eventually Reed stops the growth of the Dome and declares a truce.  He agrees not to expand in exchange for the outside world to leave him and his society alone. 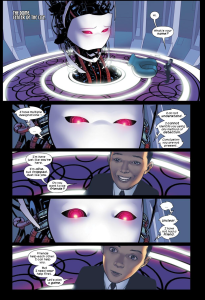 Of course the Ultimates aren’t going to just let this stand.  Now strap in because this is where things get really weird.  Ultimate Tony Stark has a sentient Brain Tumor which takes the form of a 8 year old child version of Tony Stark.  Tony has been talking to his tumor and realized the tumor has the ability to take over / hack machines.  Tony infiltrates the Dome his tumor takes over the AI of the city and causes it to collapse in on it self.  During this the Ultimates come in and wreck shop and are able to stop Reed this time for good (well for a while).

Evil Reed Richards! Utopian Society! Super advanced society from kind of the future! Tony Stark with a sentient brain tumor that has super powers.  Guys this comic has it all and you absolutely have to check it out.