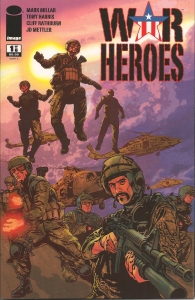 War Heroes is a six part mini-series written by Mark Millar (writer of Wanted and Kick-ass). It was released in 2008 by image comics. First of all let me say that image comics does a great job with this issue in presentation, not only does this book have a nice hard stock cover but it also doesn’t have any ads within the story. At first I thought it was a fluke but there really aren’t any ads in the book until the end, and even then there isn’t an ad on the back cover. I can’t remember the last book I have seen without an ad on the back cover! Hell DC is even putting ad banners on the front cover of a lot of their books recently so it’s nice to see a company give a shit out their product looks.

So the basic premise of this book is an alternative world take on the war on terror. Past the 9/11 attacks the USA has been attacked several more time in increasingly devastating attacks, starting with an attack on the capital. As the attacks escalate the response of the USA has increased as well. Martial law was declared after the being attacked in Washington DC and within six weeks the USA has invaded Iran. Later the USA has sent responses to Syria and other Middle Eastern countries. While increases in recruits occur after every attack the war is extremely unpopular and the government is having a hard time getting new recruits. In an effort to get new recruits the government has been giving new recruits super soldier drugs which give them comic book like super powers. Super strength, speed, and flight are included in some of the powers. The book ends with a small glimpse of several new recruits on their last evening at home before being sent to boot camp.

So it’s a little disconcerting that the first page has a Muslim with a bomb strapped to his chest blowing up Washington DC. That being said this book is definitely not pro-war propaganda such as Frank Miller’s Holy Terror. There is clearly some stuff going on under the surface and it is apparent that some of these attacks on US soil were clearly inside jobs.

“Even black Tuesday when two and a half thousand Americans died in three separate chemical attacks, failed to bring the country back together like the president expected”.

Clearly more is going on and I’m assuming it gets into all of this throughout the series. I have been a big fan of Millar’s work on other series and this seems on par with some of his other works. He often likes to mix genres and which comic books. This really fits along those lines of what if soldiers had super powers. He’s done stories like this before with Superman Red Son, Wanted, Kick-ass, and Jupiter’s Legacy. It’s repeating himself for sure but he also does a good job and each one of these stories feels pretty unique and deals with different issues.

It wasn’t enough really to peak my interest into reading more but it does seem like an interesting story.

I did some digging on wikipedia and this series is famous for never completing.  It was suppose to be a 6 part series but ended abruptly after only 3 issues without a conclusion (it made it on Newsarama’s list of Comic Book Cold Cases).  The first issue was released in June of 2008, the second in September of 2008, and the third in October of 2009.  The series was optioned by Sony in 2008 for the film rights but being its been 6 years since any word we can safely call this series dead.

Born out of the depths of Hell Jason is considered to be the song bird of his generation. END_OF_DOCUMENT_TOKEN_TO_BE_REPLACED
This entry was posted on Wednesday, May 13th, 2015 at 9:33 am and tagged with book club, Comics, Comics books, comixology, image, image comics, mark millar, mystery comics, war heroes, woot, woot.com and posted in Mystery Comics. You can follow any responses to this entry through the RSS 2.0 feed.
« Catwoman 75th Anniversary
DC Comics Bombshell Variants Return! »