Batman as a pirate? Why the fuck not.  This is the first part of my multi-part series where I’ll be going through a bunch of Elseworlds Annuals that I picked up at Comicpalooza.

This is the story of Leatherwing who is a pirate in service of the King of England (King James II). While it appears that Leatherwing gives all of the treasure he collects on the high seas back to England he actually keeps a portion for himself in order to buy back his lands and family fortune which was taken from him. Leatherwing is captain of the Flying Fox (a Zorro reference) who he sails with his first mate Alfredo.

While Leatherwing is stopped in Kingston the street urchin Robin Redblade sneaks on to the Flying Fox. While hiding out on the ship Robin learns that some of the men are planning to mutiny. Robin tells Leatherwing of this plot which Leatherwing shows his gratitude by allowing Robin to be a Buccaneer on the ship. 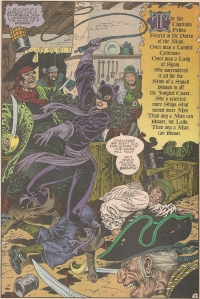 Next we cut to Capitana Felina (Catwoman) whose crew is in the midst of mutiny. She finds an unlikely ally in the Laughing Man (The Joker) who intervenes and kills off the mutinous crew mates. To pay him back for his help Felina agrees to seduce Leatherwing and tell the Laughing Man the location of his secret port.

The Laughing Man has Felina walk the plank of his ship knowing that Leatherwing is near by and would intervene. Leatherwing does just that and saves Felina just as she is about to be eaten by a shark. 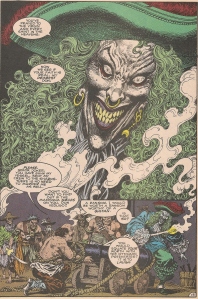 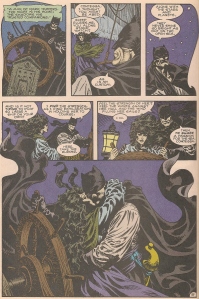 Robin follows her and is captured by the Laughing Man’s crew. Once captured Robin berates Felina for betraying the man who loves her. Felina explains that he betrayed her by romancing her while he was already married. Robin explains the situation with the Princess and tells Felina how she means nothing to Leatherwing. Felina understanding what she just did rebels against the Laughing Man and frees Robin. Felina fires off a Cannon near Leatherwing’s secret port in order to give them warning of the impending attack.

With Felina’s warning shot Leatherwing is able to get to the Flying Fox and attack the Laughing Man’s ship.  After some fighting Leatherwing eventually straight stabs the Laughing Man in the chest and kills him.  Felina explains what happens and apologizes and Leatherwing and Felina sail off to the sunset together.

Overall the story is ok, but I never really got into it.  What I like about these Elseworlds stories the most is when they really flush out a universe.  This story had a lot of Batman elements in pirate form but I never felt that any of it really had legs of its own.  It was just “here’s pirate Robin, here’s pirate Alfred, here’s pirate Catwoman”.

There story felt like it was just a once over coat of paint.  It looked ok on first glance but if you really picked it apart there’s not much there.  For instance why was Batman so loyal to the English crown?  He was giving away the large majority of his pirating to the crown while only keeping a small portion to himself to rebuild his family fortune.  In the comic he says that he is pirating specifically because his parents were killed and all his titles / fortune were  stripped by the crown.  It just doesn’t make sense.

Again the overall story is feels fine, I just wish they had worked on the details more.  While this issue isn’t available digitally if you are interested in Leatherwing there is another adventure in Batman Chronicles Issue 11.

Born out of the depths of Hell Jason is considered to be the song bird of his generation. END_OF_DOCUMENT_TOKEN_TO_BE_REPLACED
This entry was posted on Tuesday, July 28th, 2015 at 11:14 am and tagged with 1994 annuals, alternative universe, batman, catwoman, Comic Books, Comics, dc comics, detective comics, detective comics annual, elseworlds, felina, joker, laughing man, leatherwing, robin redwing and posted in Comic Books, Elseworlds. You can follow any responses to this entry through the RSS 2.0 feed.
« Mystery Comic 8: Blackest Night R.E.B.E.L.S. Issue 10
Top 10 DC Animated Moments »