Wonder Woman 178 is a good example of how confusing a comic can be if you try to just pick up a random issue. It’s hard to say what exactly is happening in this issue because I have no context for what is going on.

It starts off with a teenage girl and her friend reading through fan mail. We are told this is Cassie Sandsmark and she is the new Wonder Girl. We don’t really get much other information about her other than that. When going through her fan mail she finds a letter from her father which she is upset/surprised about? It looks like she hasn’t talked to her father in a long time but we really get no information about it. That’s pretty much the entire story involving Cassie.

So sandwiched between this story is a Wonder Woman story. And it revolves around Wonder Woman going on a date with a guy named Trevor Barnes, who is not Steve Trevor. So their date is them going to dinner and they have a snowball fight afterward. Trevor comes back to Wonder Woman’s place where some sort of dimensional warp or something has opened and some guy named Garth appears. He tells Wonder Woman that he needs her help to recover Aquaman’s trident which has been stolen. She agrees and tells Trevor they will finish their date when she gets back and the comic ends with a hydra coming through the dimensional portal and attacking Trevor.

There is also a backup story in this comic too called “Troia in Post Cards from the Edge”. It stars Donna Troy who is Wonder Woman’s sister and Wonder Girl (or generally is, who knows with this Cassie situation). The backup is only a couple pages and its Donna visiting Themyscira and taking pictures. She going to the training area where they convince her to suit up and spare with them, and when she does suddenly Fury is there and beating the shit out of her friend Rhea.

So the Cassie story is pretty confusing, I guess something recently happened that made her Wonder Girl and they have some plans for that but they don’t give you a lot to go off of. We also don’t know why she’s Wonder Girl and not Donna Troy.

The Wonder Woman story isn’t really very interesting either. I don’t know who that guy is she’s dating or really care that she’s going on a date. The only interesting thing to happen is this new quest she gets to find Aquaman’s trident but that is at the end and left as a cliff hanger. 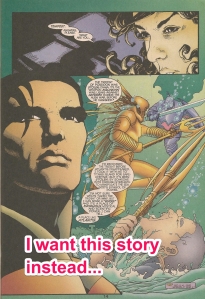 The backup was all right but again really just raises a lot of question and not much happens.

I think this is one of those strange in between arc issues where they are sort of wrapping up a previous arc and sort of going into a new arc. It’s like those episodes of Dragon Ball Z where they just flex a lot and get ready for a fight and absolutely nothing is moved forward story wise. When done well this can be an opportunity for a comic series to have a good one off story in between major story arcs. However in this case it’s just an issue where nothing really happens. The art is also very so-so. The cover is done by Adam Hughes and is gorgeous, but the interiors are done by Roy Allan Martinez and very bland. It’s not the worst art and at times looks good but has this weird style that when it’s of close ups of peoples face makes them look like aliens.

It reminds me a little of Tim Sale’s art which I have the same on the fence feeling for where I can’t decide if I don’t like it because of how stylized it is. The story is pretty lame. I’m sure it makes more sense in context with a few issues around it but as a stand-alone comic it doesn’t really work. The rule is that any comic is some one’s first issue and it should give the reader enough to follow along with no context. This book could have done that with a little more explanation and with how little actually occurs in the issue its confusing why it didn’t.

Lastly, here are the two best ads from the comic, one for Rollerball and one for Disney channel. 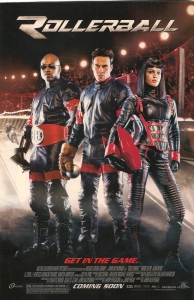