July’s box came with the following:

Here is a closer picture of the T-Shirt and Coaster

First book on the list is Star Trek / Green Lantern which by the amount of variant covers they are putting out for it, is a flagship book for IDW.  The comic starts out with a little alien dude who looks like he’s from Oa The Living Planet, he is over come by six different corps rings and dies on a remote planet.  Cut to the Star Ship Enterprise discovering said planet and sending a ground crew to investigate.  The crew finds the dead alien and six corp rings and take them back to the ship.  Once back on the ship a cloaked Klingon Bird of Prey appears and threatens the Enterprise.  While this happens Scotty accidentally energizes the rings and they find the nearest person attach to. A Yellow Ring (Fear) to a Klingon named Chang, a Blue Ring (Hope) to Pavel Chekov, a Violet Ring (Love) to Nyota Uhura, a and Indigo Ring (Compassion) to Lenard McCoy.  The comic ends with Hal Jordon showing up and a big “to be continued”.

Overall the story was meh.  I’m not going to buy more issues, but it was entertaining enough to read.  The Star Trek people are based on the JJ Abrams movies which is a little offsetting.  The art is very good, it’s just jarring to see the actors from the movie being portrayed in the comic.  It looks like it could be an interesting story and IDW is really throwing it’s weight behind this series but these movie properties comics just aren’t my bag. 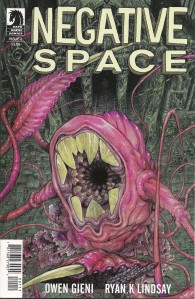 This is a weird ass comic.  First off I will say that it did have excellent artwork.  The art has very detailed pencil work that must have taken the artist a really long time to draw.  As for the book it self, I’m on the fence.  The main premise seems to be this.  What if you had that weird organization from Cabin in the Woods Existed and their mission was to make people commit suicide.  We follow our hero a writer named Guy as he is trying to figure out what to write in his suicide note.  He seems to be taking too long for the mysterious organization so they cause his day to get worse to help him muster out the courage.  Eventually Guy has a change of heart and it ends with him discovering the organization.

It was an ok, although weird, story and the great art really helped, but I’m not going to be pursuing this comic any further. 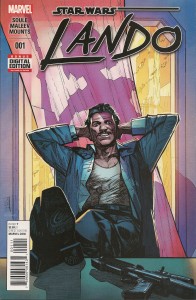 Since Disney bought out Marvel and Star Wars there have been a slew of new Star Wars Comics.  You can tell we are reaching the bottom of the barrel when Lando gets a solo book.  I’ve heard the quality of these Star Wars books was great and although I’ve purchased issue 1 of the Star Wars Main series and Princess Leia solo book I haven’t read them yet (my backlog be crazy right now).

I was actually pleasantly surprised with Lando.  I was a decent, well written book, about a character I truly give two shits about.  If the other Star Wars books are as good as this then I should be in for a real treat.  I won’t be buying more Lando issues individually but I will be reading through some of these new Star Wars books that have just become available on Marvel Comics Digital Unlimited.

Full disclosure I was not paid for this post and bought this comic block with my own money.  I am doing this unboxing for my own entertainment, however, if the people at nerd block wanted to give me free things I would love to take them and review them here.