Mystery Comic 6: Hammer of God: Sword of Justice Issue 2 of 2

This book is terrible. It is the second issue of a two issue arc and I’m not going to pretend I bothered trying to read the back up that explained what happened to this point.  This book is chock full of the things I hate about Science Fiction writing the most.  It goes out of its way at times to try to create a its own futurist system of slang only to abandon it just as quickly and use slang of the time that is all ready dated.

The story is based around a monkey / human hybrid called the Hammer.  I don’t really know why he’s important or care enough to find out.  The first half is spent talking about how Hammer (the monkey guy) is coming and they need to prepare, and the second half is him attacking this Brain ship.  He eventually defeats the brain ship which has a whole city inside it and they re-purpose it for themselves.  Is it the end? I don’t really care.

I don’t really have much to say about this book.  It’s by far the worst book I’ve read so far out of these mystery comics.  There weren’t really even any funny ads.  I went back and forth if I should scan more pictures of the inside but nothing was crazy enough or good enough it seemed it deserved it.

Wow.  I thought Hammer was a terrible book but Squalor is unreadable.  I would sum things up but I honestly have no idea what was going on.  This is part 4 of a 4 part story but still, I couldn’t even get a glimpse of what the plot was suppose to be.  Here is a sample of what the comic is like. 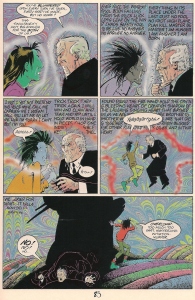 Every page is like this.  It mostly takes place in this dream world which the characters just speak in non-sense.  When it does cut to the real world it makes even less sense.  I have nothing else to say, so far Squalor is the clear front runner for the worst comic in this entire batch.