It’s been a while.  It’s funny, in my mind I hadn’t posted in a few months and then I actually look and whoops it’s been 3 years.  A lot has changed and some hasn’t changed.  I’ll get into it more in a future post but basically I got really burned out on comics after the Secrete Wars / Convergence event back in 2015 and never really recovered from it.  I went from a weekly reader of new comics to going well past a year of reading any new comics.  I’ve tried to read some here and there but mostly have struggled to get back into comics.  I hope to still blog about comics here and pick up some series but honestly I’m not going to force it.  So there may be a slew of non comic related posts on here instead.

Outside of comics there is news I have to post and it is entirely cat related.  Our clan of two has become and clan of 3 and we added a new cat to the family last summer.  We were not planning on having more cats than people in the house but fate had different plans.  We found Celine at my wife’s work and decided to give her a home.  I wouldn’t say she’s “getting along” with the other cats but they have decided on a understanding of each other and mostly continue to keep to themselves. 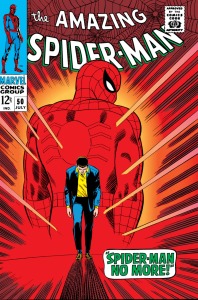 Hey there True Believers.  This very post marks my 50th post on this blog so I’d thought I’d take a minute to rundown my 5 most popular blog posts so far.  Before that a little shameless self promotion here.  I started a Facebook Fan Page for the blog (you get find it here) where I’ll be putting in all my blog posts.  I’ll also be posting other comic book related videos, news, and articles so go ahead and give it a like. 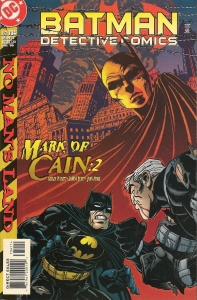 This is a great comic to start with because it’s a batshit (pun intended) crazy. First of all its part 20 of the of 88 “No Man’s Land” crossover event that took place during the entire year of 1999. Let’s take a minute to let that marinate. There was a crossover Batman event in 1999 that took place across 13 titles and various one shot comics. So if you were trying to follow along in this series back in 1999 you would have had to buy 88 issues costing roughly $175 dollars. Even though that’s over an entire year that’s a hell of a lot of comics if you want to get the entire series. It also means is confusing as shit if you were to be a new reader trying to get into a certain comic. 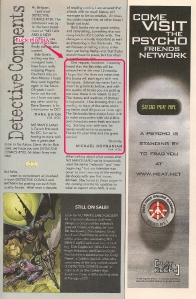 It’s intimidating enough when you see a number like 734 next to a book. If you are new to comics you are going to ask yourself, “Do I need to read 733 issues to know what’s going on?” Not only that but this is part two of a two part story, “No problem!” you exclaim, “I’ll just buy Detective Comics 733 and all will be well.” So you go to Detective comics 733 but when you do its list as “Crisis of Faith” not “Mark of Cain”. No “Mark of Cain” part 1 is in Batman Comics issue 567. And not only is Detective Comics 733 not the first part of the story you were looking for but it also is part 16 of No Man’s Land not part 19. So within one month you have lost three parts of the No Man’s Land arc.

This is a perfect example of why it’s so hard to break into comics if you are an outside reader. Of course with the internet its easier now to find out what is happening with comics month to month but it’s still pretty damn difficult. If comic book companies are scratching their head to why people don’t buy comics this serves as a huge example. First it’s a huge crossover that involves close to 100 books, second they are spread out randomly across 13 titles, and third within a year afterward none of the events of No Man’s Land even mattered. I get the need to keep the status quo when it comes to a character like Batman. You can’t really kill or injure characters and so that happens the impact that stories are going to have. But to have an event like this that last an entire year and involve so man titles have all most no lasting impact in the Batman or DC universe, its little wonder how this kind of thing can lose more readers than it gains. It’s another example of the comic industry desperate for sales squeezing as much money from their base as possible rather than do something that might gain new readers.

Ok enough rant back to the comic itself.

So needless to say it’s a little confusing coming straight into this book. You get a one sentence blurb kind of describing what No Man’s Land is and then it jumps right in. Cain is trying to kill Commissioner Gordon and his daughter tackles him out a window to stop him. Batman saves the both of them holding on to Cain with a rope and Cain holding on to his daughter by the hands. He drops her and it picks up with Cassandra (his daughter) in a graveyard (hanging out not cause she’s dead) not exactly explaining how she survived the fall.

Batman then talks to Cassandra for a while (no explanation why or how he got there) and finds out that Cassandra can’t speak any language, she only knows the language of violence. 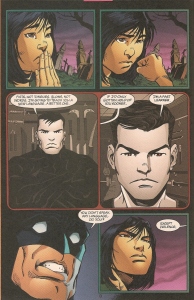 Are you shitting me? The language of violence… I know enough about Batman to know that Cassandra Cain later will become Batgirl. I have also read enough Batgirl that they use this whole she can’t speak thing for a while in the comics. It leads to interesting stories but she understands language she just can’t speak it. I don’t know how this kind of thing works but it seems to me if you can understand English perfectly you should be able to speak it to some extent. It lead to some interesting stories but they winded up dropping the whole thing by a very random contrived method. They had some random meta-human who we have never met and never see again. He has the ability to fix peoples brains and he happens to run into Cassandra, fix her brain, and leave. So from then on Cassandra can speak and write. It was a total cop out and you can tell it was only done because the writers were tired of skipping around how she couldn’t speak and picked an easy out. So knowing what I know about the character this whole section about Batman’s shock at her only knowing the language of violence is pretty lame.

Back to the story, Batman finds Cain and fights him while Cassandra dons a black mask and attacks/steals money from Two Face. It cuts back to the Batman/Cain fight and right before they land a devastating blow on each other Cassandra breaks up the fight distracting them by throwing the money she stole from Two Face at them. Then it cuts to Batman introducing Cassandra Cain to Barbra Gordon (Original Batgirl) who thanks her for saving her father and tells her she was once Batgirl. It ends with Batman saying to Oracle “Oracle. Call them”, with no explanation of what that means. 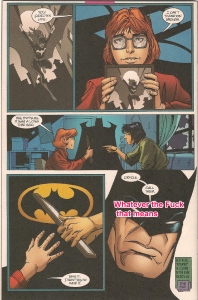 Over all it’s not a bad comic just really hard to follow completely out of context. I luckily had some history about No Man’s Land and Cassandra Cain but which helped a lot. Had you just picked this up without any context it would probably be a lot of non-sense. Overall I give it a 6 out of 10.

Here are a couple of my favorite vintage ads from it. 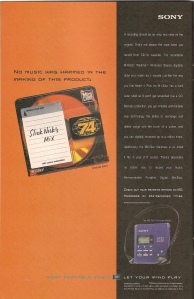 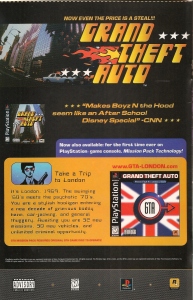