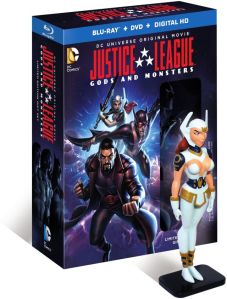 The next DC Comics Original Animated Movie is coming out on July 28th and will be a little different than the usual fanfare.  Instead of being a movie based on classic story arc from the comic books, this film will be a completely original property from Bruce Timm (the man who created the look of Batman: The Animated Series from the 90’s).  This will be an Elseworlds story that will be taking a radically different approach to the Justice League we know and love.

In this world Batman is not Bruce Wayne but actually Kirk Langstorm (Man-Bat) and is a Vampire.  Superman is still the last son of Krypton but no longer the son of Jor-El.  In this world Superman is instead the son of General Zod.  Wonder Woman isn’t an Amazon in this world but one of Jack Kirby’s New Gods named Bekka.

Not only will there be a new movie but there will be a slew of other material as well.  First, there is a 3 part web series by Machinama, which you can watch below.  DC has already announced will be a second season in early 2016 featuring 10 additional episodes.

There will also be a line of action figures.

And lastly, a daily digital-first comic book.  The series will debut digitally on July 1st and release 18 issues daily ending on July 18th.  This series will be a prequel that will dig into the origins of the Batman, Superman, and Wonder Woman of this new universe (source).  You can the first part featuring Batman here on comiXology.

I am planning on going all in and buying the movie along with getting all the issues of the digital-first comic series.  It is no secret that I love a good Elseworlds story so this whole thing is right up my ally.

Born out of the depths of Hell Jason is considered to be the song bird of his generation. END_OF_DOCUMENT_TOKEN_TO_BE_REPLACED
This entry was posted on Wednesday, July 1st, 2015 at 8:15 am and tagged with alternative universe, batman, Comic Books, Comics, dc animated movie, dc comics, dc comics original animated film, elseworlds, gods and monsters, justice league gods and monsters, superman, wonder woman and posted in Comic Books, Elseworlds, TV Shows. You can follow any responses to this entry through the RSS 2.0 feed.
« Mystery Comic 6 and 7
Netflix PSA: July 2015 »

One response to “Justice League: Gods and Monsters”