Constantine marks the last of the new Comic Book inspired TV shows to come out this year. You may have noticed I haven’t made a post on The Walking Dead yet. I will, it’s just I’m way behind on the series (currently only half way through season 3) so I’d like to catch up a little more before I write about it. However that reality is looking less and less likely so I’ll probably just go into it not knowing how the last season and half turned out. But we aren’t here to talk Walking Dead, we are here for Constantine.

Most of the new TV season came out during September with Constantine the only straggler premiering in late October. I think this was probably to coincide with the spookiness of Shocktober but also probably to get it a little breathing room from all the other shows coming out this year. Constantine is the only comic book related show on NBC and honestly the way they have premiered it late and have it showing on Friday nights (the night that TV shows go to die) shows the lack of confidence they have in it. I’ll never understand putting all the money and effort to get a show produced and then actively trying to harm it once it’s released but whatever…

The show starts off with Constantine in the famous Ravenscar insane asylum. We get the impression that he has committed himself here during the aftermath of something that occurred in Newcastle. While in the asylum he performs an exorcism on demon which gives him a warning and leads him to Liv Aberdine. Liv is the daughter of Constantine’s mentor who is unaware of the entire supernatural world which Constantine introduces her to. They come across the demon Furcifer which after a fairly impressive CGI battle Constantine sends back to hell. Some things are revealed and due to a little intervening by Constantine Liv decides not to get into the exorcism business but leaves John with a map speckled with locations where supernatural events will soon occur.

Overall this was a great first episode. We get an already battle worn John Constantine who we get the impression has been in the exorcism business for a while. We get the impression that the business has taken a toll on him and that mistakes have been made along the way. The early introduction of Newcastle is a nice little easter egg of the Newcastle Incident that appears in Hellblazer Issues 11 and 12. At first it’s mostly smoke and mirrors that something bad happened there but we get a better explanation of what went down during the end of the episode. We also meet Hellblazer regular Chas Chandler who you may remember from the 2005 movie played by Shia LaBeouf pre-I’m-not-famous stage.

While it comes together pretty well there has been some weird behind the scenes decisions which effected the episode. The character of Liv was meant to be the co-star of the show and work with Constantine though the series. Something happened behind the scenes and she was written out of the show which makes for her awkward introduction and quick disposal as a character. They do this as organically as possible but its pretty clear they had long term plans for her in the series and last minute decided to ditch her. I don’t know how this will effect things going forward but it seems like a bad choice to make. For a TV show the CGI did look pretty impressive which is good because with all the supernatural elements the series needs bad CGI will slowly make the show grating and hard to watch.

Overall I did like the show. I think they had a good atmosphere and theme and did a good job of capturing the essence of John Constantine. John Constantine isn’t a great guy, he’s selfish and while he’s doing good work he’s generally doing it for selfish reasons. The show did a pretty good job of getting this across. I think it is undercut a bit introducing the Newcastle incident so early in the series. This was a real mess up for John and deeply affects him throughout the entire comic book series. It was good to see this was in the show but it would have been good to have more perspective about it. Constantine does dickish and selfish acts like what he did at Newcastle all the time generally feeling little to no remorse. The way they are portraying him I believe this will come out more as the show progresses and I think the over compassionate side of was just due to them only being able to show so much in a single episode. 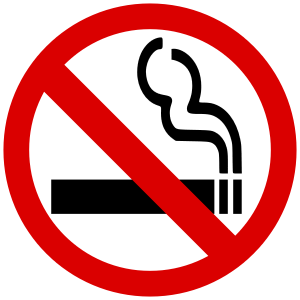 I know. This has been discussed ad-nasium. From the moment they announced the show the first question was “Will Constantine smoke?” and for some its literally all they seem to care about. It’s a stupid thing to get to hung up on but it really is a big part of who he is. The “Dangerous Habits” arc about John getting lung cancer (which the 2005 movie was loosely based on) is one of, if not the most popular arc in the series. Would Don Draper be as iconic and intimidating if he didn’t smoke? Probably, but smoking is a part of who he is and has effected major story lines in Mad Men. NBC can’t show Constantine actually smoking. I believe their hands are tied in this matter and apparently network TV cannot show people smoking. I think they do a decent compromise with basically showing everything but him actually smoking. They make an obvious effort to show Constantine with his lighter at every possible moment and during the last scene of the show he’s shown putting out a cigarette he was clearly just smoking. We are probably just going to get more of this which is fine, it’s just dumb and annoying that NBC’s hands are clearly tied in this matter and these are the hoops they have to jump through.

Overall I am really looking forward to this show. It looks like it’s going to be like a police procedural with John fighting new and interesting demons each week. Basically we are getting a new version of the X-Files and I am completely on board for that. There is a lot of backlash about how Constantine has been watered down since his reintroduction into the new 52. I really just don’t see this as the case. Is the new 52 version of Constantine different than the Hellblazer version? Sure. But at the heart I think it’s the same character and if there weren’t some changes or growth in the series it’d be stagnate and boring.

Born out of the depths of Hell Jason is considered to be the song bird of his generation. END_OF_DOCUMENT_TOKEN_TO_BE_REPLACED
This entry was posted on Saturday, November 8th, 2014 at 8:28 pm and tagged with Comic Book TV, Comics books, Constantine, Hellblazer, NBC, new fall tv, newcastle, shocktober and posted in TV Shows. You can follow any responses to this entry through the RSS 2.0 feed.
« Shock-tober! Sabrina and Wytches
DC’s November Lego Variant Covers »