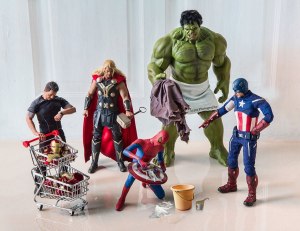 With DC launching their new DC You titles and Marvel finally announcing their plans for after Secret Wars I decided to do a little Summer Cleaning of the old Pull List.  To start off, here is what my current Pull List looks like:

*LS indicates it is a limited series and not ongoing

My ultimate goal is to bring this list down to a lean mean 10.  Fight Club 2 is a limited series but is coming out monthly so I consider it a number in my list.  Jupiter’s Legacy is so infrequent that while it is on the list I don’t really consider it a “monthly cost”.

Here are the books I dropped: 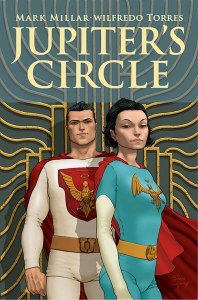 These books aren’t bad but I find my self letting them stack up 3-4 months at a time with no desire to read them.  I may pick them up as a trade later but as for now they are just costing me money.  I never really enjoyed Jupiter’s Circle so it was the easiest book to drop.  Jupiter’s Legacy has come out once so far this year so I feel pretty safe keeping it on my list.  Wytches was ok but I’d rather read it collected 6 issues at a time in a trade rather than go monthly.  Angela: Asgard’s Assassin and Gotham Academy were both pretty good for the first arc but I still lost interest.  Superman / Wonder Woman has been good but it lost a lot of what I liked when they switched artists and it was no longer Tony S. Daniel.

This will have me pulling all of the main X-Men team books with the addition of the Old Man Logan solo book.  I’ve been pulling All-New X-Men for a while now and while I’ve really enjoyed it, have missed out on crucial information by not pulling the other main X-Men Books.  So with all of the Marvel books getting rebooted to number 1 it’s a good time to get in on the ground floor of all three main X-Men books at once.

The only ongoing new DC comic book that I’ll be adding is the new Justice League of America from Bryan Hitch.  I’ve gone through the whole list of new DC books and this new JLA is really the only one that I’m interested in.  I’ll be getting Justice League: Gods and Monsters but it is a limited series and will be ending on July 18th.

Marvel, All-New X-Men Annual is Why We Can’t Have Nice Things 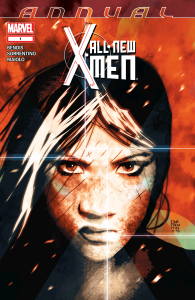 Star Trek vs. Star Wars, Apple vs. Android, Vampires vs. Werewolves, no matter how arbitrary it seems like we are all ways picking a side. Generally when I met fellow comic book nerds this is one of the first things that comes up is which do you like DC or Marvel? For the sake of argument I generally just say DC but the truth is I like both and the argument that one if better than the other is dumb. I say thing because I’ve written a lot about DC in past posts and I don’t want this to seem like I’m just an exclusive DC fanboy. I have Marvel and DC books on my pull list and go see every comic book movie that comes out regardless of which company puts them out. The rest of this post is going to be talking a lot of shit about Marvel but before I want to say some good things. I really do like All-New X-Men and it’s one of my favorite books to come out each month. I also regularly Read X-Men, Uncanny X-Men, Angela: Asgard’s Assassin, Guardians of the Galaxy, and will start reading the monthly Spider-Gwen when it comes out. I think Marvel has been really smart to release digital copies of books with their books. I really appreciate it and it actually is a big selling point for me. I wind up picking up a lot of Marvel books I might not have just because I know I get a digital copy with it.

Ok niceties over. So as I said above All-New X-Men is on my pull list for my local comic book shop. It had been coming out pretty consistently bi-monthly but took a bit of a break in November so I was pretty happy when it came back in December. I was even more excited when I saw there was an Annual come out only a week later! I start immediately reading the book and am completely lost and confused. I do not know who Eva Bell is, she is not a part of the All-New X-Men team, hasn’t showed up in a single issue, and is lost in time and space for some unexplained reason. If you were only subscribed to All-New X-Men you would have just wasted 5 bucks on a book that is utter non-sense.

Here was my process of figuring out what was going on.

I read Uncanny X-Men through the Marvel Unlimited app so I have an idea about what is going on in that book but I’m 6 months behind. So I at least am ahead of the curve in that I know who Eva Bell is, but I don’t know why she stuck in time or what is going on. My first clue was when I redeemed my digital copy of the book on Comixology and happen to see the description say “the secret life of Eva Bell Part 2”. Ah, there is a part 1. I searched Comixology and found that part 1 was in Uncanny X-Men Annual. 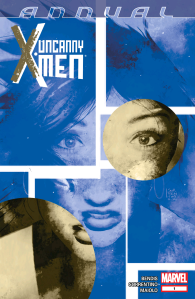 Ok so I picked up that issue as well. It still starts off in the middle of the action again so I figure I missed something in Uncanny X-men that explains why Eva Bell is stuck out of time. So I read the front matter of the book (which I never do) and this is the explanation. 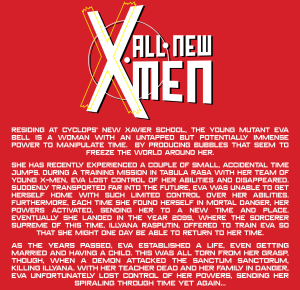 Ok so I did miss something. I go back in my marvel unlimited app and can’t find an incident where Eva disappeared and came back aged 7 years. It is either in one of the recent six issues or I missed it. I google what issue it is and figure out they are talking about Uncanny X-Men issue 17.  Here is Eva Bell from Uncanny X-Men 17. 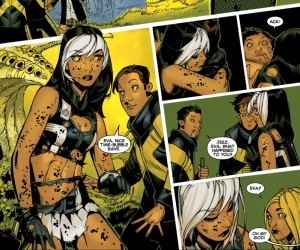 This is good, it is in the Marvel Unlimited app so I can read it for free. I re-read the issue and it does take place in the Danger Room but said incident of Eva Disappearing does not occur. I even skim through the next couple of issues and Eva Bell is in them but no mention of her aging 7 years.  I did find this from Uncanny X-Men issue 19, which is vague but the best I think we’ll get for an explanation. 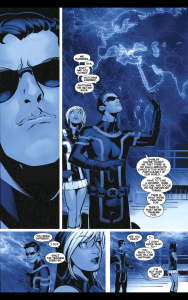 At this point I just accept that this is the best I’m going to get and move on and read both the Uncanny X-Men and All-New X-men Annual.

So just to recap here is what I needed to do to understand the All-New X-Men Annual:

This is what frustrates me about Marvel comics. It’s a complete God Damn mess. You cannot just read one series and get a cohesive story. You really need to read All-New X-men, X-Men, and Uncanny X-men to get a coherent story. This isn’t just an X-Men problem. Angela joined the Guardians of the Galaxy but left for Asgard in a Thor comic with no explanation back in Guardians. One day she just wasn’t there anymore. Venom then joined the Guardians of the Galaxy but not in the series but in the Free Comic Book Day issue which came out after he was walking around with them in Guardians Issue 14.

This isn’t even to mention the constant barrage of even tie in issues.

Tie in issues aren’t exclusive to Marvel. As a reader of Batman there have been tie ins across most of the bat family books for every major event. The difference is that they are done in a way where they have been one shot stories and they give you all the information you need within the series to understand what is going on. When Batgirl had a Court of the Owls tie I didn’t need to read any of the court of the owls books to know what was going on. Vice versa, I could only read the Batman main series with no tie ins and get the complete Court of the Owls story.

The worst part about this the story “secret life of Eva Bell” story is actually pretty good. Once I actually read both parts and had the context of the story I actually really enjoyed it. I felt the same way about the Battle of the Atom event that spanned across 4 different X-Men books. It was a great story but just done in a batshit insane fashion. Had I not wanted to read the whole Battle of the Atom event I would have been shit out of luck for two months in whatever X-men monthly series I was reading.

Most fans might look at all this craziness and say “because comic books”. Yes Comic books be crazy but this is the exact reason that there are lot of people who would like to get into comics but find it so confusing and frustrating that they give up.