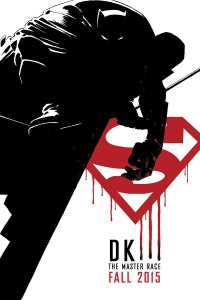 Yesterday (4/24/15) at C2E2 it was announced that Legendary Comic Book writer Frank Miller will be returning to his Dark Knight series with one more book.  Joining Miller on writing duties will be Brian Azzarello who said, “For the past six months, I’ve been working with Frank Miller to bring the next chapter in the ‘Dark Knight’ to light.  It’s been humbling. I’ve learned a lot, and I call him sensei. It’s a really, really big project.”

We don’t know much else so far.  Miller won’t be drawing the comic and we don’t know who will.  There were rumors that there won’t be a single artist but it will instead be a rotation of several high profile artists.  The release date is set for this fall.

Born out of the depths of Hell Jason is considered to be the song bird of his generation. He likes cats, video games, and kickin' ass END_OF_DOCUMENT_TOKEN_TO_BE_REPLACED
This entry was posted on Saturday, April 25th, 2015 at 1:54 pm and tagged with batman, Brian Azzarello, Dark Knight Part 3, Dark Knight the Master Race, dc comics, Frank Miller, the dark knight returns, the dark knight strikes back and posted in Comic Books. You can follow any responses to this entry through the RSS 2.0 feed.
« Mystery Comics Project: The Arrival!
Mystery Comic 1: Detective Comics: Batman – 734 »