After a long summer drought of good television to watch we have finally reached the fall TV season.  And what is different about this year as opposed to most is the massive amount of comic book properties that will be debuting.  New shows this year include Gotham, Constantine, and The Flash.  Returning with new seasons we have Marvel’s Agents of S.H.I.E.L.D., The Walking Dead, and Arrow.  We also have CBS picking up a Supergirl TV series, Preacher coming to AMC, and a possible Walking Dead spin off show.  Never has there been a greater time to be a nerd.  So as these new shows premiere I will give them a watch and report back to you, the peoples.

First up is Gotham.  Last year shortly after the premier of Marvel’s Agents of S.H.I.E.L.D. Fox and Warner Brothers quickly decided to get on the TV bandwagon and where else but Gotham.  During its announcement it was revealed that the premise of the show would center around a young Jim Gordon early in his career in the Gotham Police Department and a very pre-Batman Bruce Wayne.  This concept of a police procedural style drama centered around the Gotham police department, with a lack of Batman is actually not a new concept to the comic book world.  In 2002 a comic book series named “Gotham Central” was released which did just that.  Instead of being a young Jim Gordan it took place with a Batman currently in Gotham but with him rarely making appearances and the book centering around the Gordon and the cops of Gotham.  Batman was treated more like a myth/legend in this book and mostly appears in the shadows and talked about as rumor between the cops.  The series was originally written by Ed Brubaker and Greg Rucka and while it achieved a certain amount of critical success it had a hard time finding an audience.  The book never broke the top 100 comics in sales and after 40 issues was canceled.  While there are a lot of similarities between the book and the new Gotham TV show its been said that the TV show may be in the spirit of the Gotham Central comic book but will likely not follow any plot lines from the book itself.

Right before I began watching the show I was talking about what I thought about it and what my hopes would be.  The main thing I hoped for is that they would put off killing the Waynes until a few episodes in and establish them as characters.  This is something that I have never seen in the comics and would be an interesting take to actually see Thomas and Martha Wayne as real people instead of motivation for vengeance.  Cut to the opening scene of the show.  Dark alley, a young Bruce Wayne accompanied by his parents, leaving a theater, mother wearing pearls… We all know exactly what this is leading to.  So they not only kill the Waynes in the first episode, they kill the Waynes in the first SCENE of the first episode! They did a good job with the scene, and for an origin that we all know very well they knew enough to not spend a huge amount of time on it like some series (I’m looking at you Amazing Spider-Man).  I can’t be mad that it didn’t turn out the way I wanted but I was a little surprised they killed them in the opening scene. 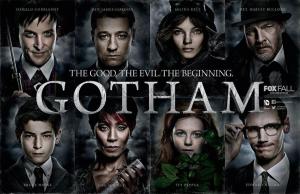 From there we are introduced to a young Jim Gordon and Harvey Bullock as they are the first detectives on the scene and assigned to the case.  Promises are made, shenanigans ensue, a suspect is captured and killed, suspicion is raised, and not all is as it appears. We are introduced to a slew of characters and the case of who killed the Waynes has begun.  It is a pretty great first episode.  Jim Gordon is our way into this world and we get a good sense of how corrupt the city of Gotham is in every aspect.  We get to see “business as usual” of crime in the city and we see Jim Gordon’s morality tested several times throughout the episode.

One of the more distracting parts of the episodes is the onslaught of cameos of every one who’s everyone in the Batman universe.  We meet Edward Nygma (The Riddler), Oswald Cobblepot (The Penguin), Falcone (The Roman), Selina Kyle (Catwoman), Bruce Wayne (Batman), Pamela Isley (Poison Ivy, and yes I refuse to call her Ivy Pepper…), Alfred Pennyworth along with famous members of the Gotham Police Department Harvey Bullock, James Gordon, and Renee Montoya.  We even get a new character (i think) Fish Mooney played by Jada Pinkett Smith.  I actually really like the avalanche of characters from the DC universe and think it will play to the show’s favor.  I think that the inclusion of such was a big part of what made the show Arrow so enjoyable and hurt Marvel’s Agents of S.H.I.E.L.D..  However, having ALL of these characters in the pilot is a little much.  I understand, this is a pilot and is made not for us audience but to sell the show to the network so there needs to be this sense of things to come.  It was just distracting and put things on such serendipitous level that it became ridiculous.

My favorite part of the entire episode is the portrayal of Alfred Pennyworth as being a badass.

This was actually done recently in the comic books in a book non-canon book called Batman: Earth One, in which Alfred is a former member of the Royal Marines and all around badass.  We see this right away as Alfred takes Bruce away from the murder scene of his parents and tells him to keep his head up and look defiantly ahead.  It’s a fresh take on a character we all know very well and it will be interesting to see where they take him going forward.  I also liked the new character of Fish Mooney.  I think Jada Pinkett Smith did a great job and plays a very good ruthless crime lord.  She is cold, calculated, and looking to take out Falcone and take over as the new boss of Gotham.

Two words, Ivy Pepper.  It’s a dumb thing to get annoyed over but it also makes no sense why you would change Pamela Isley to Ivy Pepper.  I can only guess that the stretch from Isley to Ivy was just too much for some people… But really my biggest complaint was the constant barrage of cameos from the villains of Gotham.  Again I get why they did it but it just was a little much and made the show feel desperate to show all its tricks at once.  I suspect that going forward they will retain a normal pace of giving us the story of each one of these characters but as for the pilot it was a lot to take in a once. 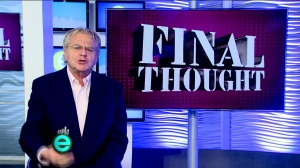 Overall I liked the show and am looking forward to seeing more.  I can still see it going either way for me but I think they are heading the right direction.

Born out of the depths of Hell Jason is considered to be the song bird of his generation. END_OF_DOCUMENT_TOKEN_TO_BE_REPLACED
This entry was posted on Friday, September 26th, 2014 at 8:22 pm and tagged with batman, batman tv show, comic book television, Comic Books, fall tv, fox, gotham, gotham central, gotham on fox, james gordon and posted in TV Shows. You can follow any responses to this entry through the RSS 2.0 feed.
« 1st All-New Collector’s Blog Post!
New Comic Book TV Part II: Marvel’s Agents S.H.I.E.L.D. »

One response to “New Comic Book TV Part I: Gotham”