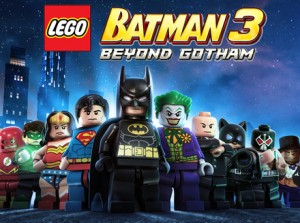 If my last post with DC’s Lego Variants didn’t give it away I am a big fan of the Lego video game series.  This started with the Lego Star Wars games which I initially bought when I got a PS3 and has continued with all most every game they have put out.  I have played all three Lego Star Wars games, both Lego Batman games, Lego Marvel, Lego Pirates of the Caribbean, and both Lego Harry Potter games.  The only ones I haven’t played are the Lego Lord of the Rings games.  So needless to say I have played a lot of Lego games, and while they are similar they manage to improve with each new game and iteration.

Lego Batman 3 continues the way of handling the games that was started with Lego Batman 2 which is to have real voice actors and flushed out story and cut scenes.  While I appreciate the effort I actually don’t like this feature very much.  The cut scenes are all unskippable the first time you see them, and while they did put effort in it I could care less about the story.   What I like about the Lego games is the gameplay and the cut scenes get in the way of me playing.  This game did a better job than Lego Marvel did and they were generally a lot shorter and less annoying.  The good news is once you finish the initial game and go back in free play mode all cut scenes are once again skippable.

Since the Lego Harry Potter series a staple of the Lego games is an open world hub area.  In Lego Batman 2 it was in the form of a very large open Gotham that you could explore.  In Lego Batman 3 there are several open world areas.  You have a large Watchtower, Batcave, and also several lantern worlds.  These areas are all very large and have lots to explore but are a little confusing.  I had to look up online to find where to buy the red bricks and will have to look online again when I am ready to buy characters and other items.  It’s not a deal breaker by any means but it is pretty confusing on figuring out where to go.

As of writing this I have finished the main game and had a great time.  The levels are similar to Lego Marvel in which there are about 3 acts in each and most end in a boss fight.  There are a couple vehicle levels mixed in that are pretty short and fairly odd.  The main levels are a lot of fun.  They have really mastered the platforming that they put in the game and it feels like they put a lot of effort in this game.  It’s hard to make puzzles you have to go through when you have Superman on your team but they do a good job at it.  They split up all the mechanics through a dozen or so characters so you still need to switch out and use your whole team to complete each level.

In Lego Batman 2 they introduced several suits you needed to unlock various parts of the game.  In Lego Batman 3 they allow you to switch between those suits whenever you want which is a awesome and great addition. 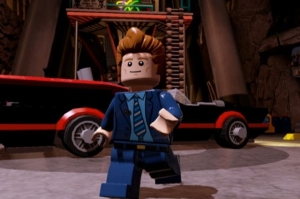 There are a total of 150 playable characters in the game.  Along with the typical batman characters and many iterations of the Bat suit there are a slew of other justice league and other DC characters.  The more famous include Wonder Woman and Green Lantern while the obscure has Bat Cow and Bat Mite.  They also included a handful of celebrity characters as well such as Conan O’Brien, Kevin Smith, and Jim Lee.  I haven’t found all the celebrities yet but its pretty awesome knowing they are there.  The characters are one of my favorite parts of these games.  I generally 100% all of these games and the main reason is that I want unlock all the characters.

Along with the game itself I went ahead and bought the season pass for DLC.  All ready out is a Batman 66 Pack, Man of Steel Pack, and Dark Knight Pack.  Along with those three there will be 3 other packs, one based on the TV Show Arrow and one based on Batman Beyond.  I’ve only played the Batman 66 DLC so far and it was great.  It gives you one story based mission (takes about 20 minutes to play) and a slew of additional characters.  The Batman 66 pack was narrated by Adam West and had the feel of a classed episode of the TV show.  When you punched characters big signs with POW, BANG, WHAM appear which I did laugh out loud when I saw them.

If you are a fan of the Lego games you probably have all ready bought this.  If you haven’t played a Lego game before this is a great one and you’d probably have a good time.  I’ll leave you with one little cheat that you can use in all the Lego games.  So part of the cheats you can buy with the red bricks are multipliers that multiply the amount of coins you get.  There is a 2x, 4x, 6x, and 10x.  The key is that they stack together so when you have them all on you get 3840 times as many coins as you normally do.  So when you are playing don’t bother buying characters right away, save all your coins to start getting the multipliers. By the time you have the 2x, 4x, and 6x you will have so many coins you won’t have to worry about running out any more.

Born out of the depths of Hell Jason is considered to be the song bird of his generation. He likes cats, video games, and kickin' ass END_OF_DOCUMENT_TOKEN_TO_BE_REPLACED
This entry was posted on Sunday, November 23rd, 2014 at 9:46 pm and tagged with batman, dc comics, Jim Lee, Kevin Smith, lego, Lego Batman, lego batman 3, lego justice league, Lego variant covers, lego video games, video games and posted in Video Games. You can follow any responses to this entry through the RSS 2.0 feed.
« DC’s November Lego Variant Covers
Netflix PSA: December 2014 »