In honor of shock-tober, the spookiest of months, we are going to talk about two brand new horror comics.  Horror isn’t really my thing.  I’ll see a scary movie from time to time but its really not my go to genre in film, books, comics, or TV.  So I didn’t really plan on picking up any horror books in this holiest of the horror months but two books happen to come out the same day that I couldn’t resist picking up.

So this is not something I was planning on picking up.  I had slightly heard that they were doing a adult / teen oriented version of Sabrina the Teenage Witch but I had largely forgotten about it.  It was only recently that I even realized that Sabrina was actually part of the Archie universe.  I like to think I know some stuff about comic books but Archie is an entire corner of that world that I am blissfully unaware of.  I see it on occasion at the grocery store and it looks like the typical “American (fever) Dream” of the Leave it to Beaver 50’s.  I’ve seen these books from as far back as I can remember and have pretty much all ways looked the same back since I was a little kid and I assume that they even look pretty much the same as they did in the 50’s.  Now I do read about comic book news so I am aware enough to know that things have changed in Riverdale with the times.  There was the introduction of a gay character which lead to a gay wedding and there has even been a death of Archie issue recently.  I also remember recently the buzz around the release of Afterlife with Archie that centered around the cast of Archie being killed by zombies. 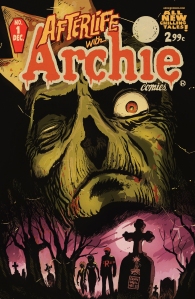 I managed to get the first issue for free in some deal on Comixology and it was actually a lot better than I expected.  I don’t honestly know what I even expected but I do know it was better than that.  The series was a (I’m going to say surprise) hit which I assume lead to the release of Chilling Adventures of Sabrina.

When I think of Sabrina the Teenage Witch what comes to my mind is two things, Melissa Joan Heart and a terrible looking animatronic cat.  It wasn’t until I read After Life with Archie and found Sabrina using Necronomicon.

With this new badass Sabrina in mind, when saw a Sabrina horror comic on the shelves I decided what the hell and picked it up.  The first thing about this book is the art is really great.  It has a shaded water color style sort of like what American Vampire’s Rafael Alburquerque or Lil Gotham’s Dustin Nguyen does. 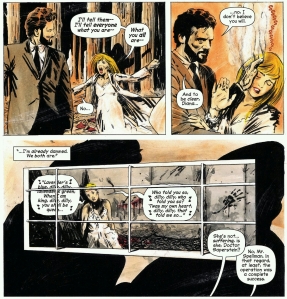 Story wise I was also pretty impressed with this book.  We get a sense of things to come but largely this is a origin story tale of Sabrina and it manages to break down from her birth to teenage witch years without it getting too annoying.  I again don’t know much about Sabrina but at least from the TV show I know she lives with her aunts and they manage to explain that into this story.  It also stays in the 50’s and 60’s as far as time goes which could be hookey but works well in this book.  She still has her talking cat Salem and we meet her Cousin Ambrose.  The story is mostly set up but it ends with a creepy naked woman in the woods which looks like its the first clue to the main story.  Overall I liked the book a lot more than I thought I would.  It seemed like this is a cash grab for the new audience they found in Afterlife With Archie but they don’t phone this in, the art and story are great and I’ll probably add this to my pull list.  There is also a small introductory back up story that introduces Sabrina and some concept art which were nice.  This is my first Archie comics book I’ve bought but like Image Comics there are no ads.  The book also comes in at 43 pages which for a 3.99 book actually makes the 3.99 price a lot more bearable.

I’ve had this book on my pre-order list for a while now and have been pretty eagerly anticipating it.  This book is written by Scott Snyder and has artwork done by Jock.  Scott Snyder if you don’t all ready know is the Golden Goose of DC Comics right now.  He (with Greg Capullo on art) has been writing the flagship Batman title since the launch of the New 52 and has absolutely been killing it.  He also created American Vampire and has been writing Superman Unchained, The Wake, and Swamp Thing as well.  So far every thing I’ve read from him has been fantastic so any new book he has out I am going to give a try.  This book is mostly set up from what I can tell.  We don’t get a ton of information, its mostly groundwork which you expect from an issue one.  There is a pretty messed up scene right in the opening pages which give you an idea of the messed up places we are going to go in this book.

The art is by Jock and is really fantastic.  It also is this watercolors style that becomes more and less exaggerated based on the tone.  It started off in a frantic scene so the colors bleed a lot into each other but then when it goes into the exposition section its more subtle and the art is clearer.  We are introduced to our main character who is a young witch and during a extreme situation with a bully seems to unlock some of her powers.  She doesn’t understand what happened and her father is keeping quiet but he clearly knows whats going on.  The book ends with some creepy stuff going on and a cliffhanger ending.  I don’t really know whats going on but am pretty excited to see where it goes.